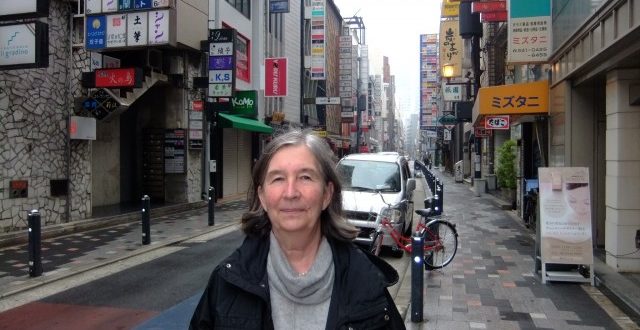 We met up in Toronto and flew to Tokyo, Japan on the 007 flight. Then we picked up another plane and flew to Itami Airport in Osaka. Norm, Jeff and I are staying in Hotel Grandvia in downtown Osaka. I think that I can speak for all of us; the jetlag gives you the feeling of a virtual reality inside of time.  Somewhere we have all lost a day and that day was yesterday Saturday, November 2nd. I do not know where it went. Einstein, please help me here…

My room is tiny but efficient. The bath is about half normal size. I think Jeff and Norm will need a shoehorn to get them out of theirs if they decide to go in for the full ablution. We all slept for a few hours and then in fits and starts.

The room service is attended to by a flock of young women who are all like butterfly-nuns. They are wearing a headgear of big black bows and bow every time you pass them with the flutter of a breeze of thank yous and other hymns. They appear to be regulated by a male head that pops out of a door like a jack-in-the –box spring.

We had a tremendous breakfast of a buffet of food that came from the sea, salmon and mackerel, the seashore, the fields and farm. This was all mixed with a European style breakfast with terribly small sausages, maybe from terribly small piggies. Jeff vaporized them.  And he is still alive. Norm, true to form, attacked the coffee counter and I imagine the hotel has to start growing coffee beans again.

First impressions for driving into downtown Osaka, wow, where were the trees? There are no green spaces visible. Jeff’s impressions were, that we were all in a concrete warren, going down into traffic while the trains and planes roared overhead. Norm’s impressions were those of a truly civil society where politeness and courtesy held the glue of civilization together. We all felt safe in Japan. A lovely feeling!

Met Katsuhiko Matsunaga. A tall man with ironed grey hair and a brimming smile. Jeff took to him, excited that at last his camera would capture the image of this scientist, this man of the sea. Norm watched his antennas waiting for sound bites of Katsuhiko. And I stared in silence, as every woman must do in traditional Japan.

Professor Katsuhiko has spent his entire life in focused study of iron even when he spent six months at Scripps oceanic lab in America, it was still on the element iron. Plain ordinary iron is a tricky thing, even a rusty nail. It can exist in states of being; one can pass into the other with a flexibility that can only excite a monk. Or me!

In a nutshell, Katsuhiko found that iron moves from the forest into the sea and builds the foundations of life in the ocean. I have added to this knowledge from the research corner of my world because I discovered that the chemicals in a leaf are photoactive. They too can live in two states of being.  It is on this love affair of iron and a leaf that nature depends. Iron flushes out from the deciduous forest in the arms of a phenolic chelate, only to be released at sea as a source of catalytic nighttime energy for the pico planktonic world of water.

Our interviews took place by the ocean. The waves shook the shoreline. And I remember, the monster let loose nearby in Fukushima not long ago. Our beach was still radioactive, even more so by the recent storm that dredged unspeakables up from the ocean floor all carrying the radioactive isotopes of iodine and strontium in their wake. I noticed, with a chill running down my spine, that there was no seaweed on the shore except for a few pieces of red laminate algae. But these too were from the deep. And stunted. The radiation per minute had to be high.

Jeff gets some shots of traditional dance provided by Professor Matsunaga’s family. Photo by Miyuki Tokoi

But the evening dinner with Katsuhiko and his “crazy” sister Kazuko Kaneko with their entire family in attendance, first in Kazuko’s house where we were treated to a Japanese dance. Then we were all taken out to dinner, a traditional one on tatami  mats. There were so many courses that I lost count. These were followed in short order by saki, bottle by bottle until the laughter rocked the entire house. And who told me that the Japanese were prim and proper?

10 Trees That Can Save the World, Call of the Forest: the Forgotten Wisdom of Trees, Diana Beresford-Kroeger, Japan, Jeff McKay, Professor Katsuhiko Matsunaga, Sugi trees, The Sweetness of a Simple Life, trees
Share Post: