Ancient Ireland and the Trees 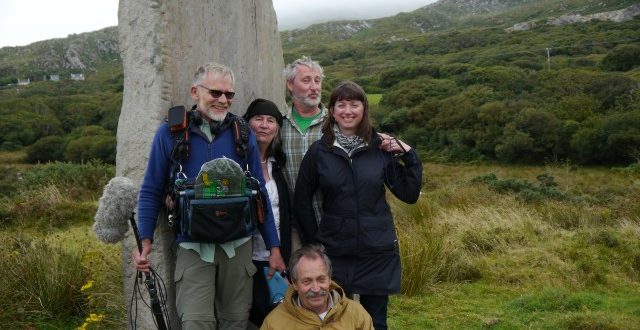 Sunday August 18th was supposed to be a rest day. Such things do not really exist in the film world. The afternoon was a typical one, beginning with Imir and Donagh bringing Chris, Norm and I to the great stone circle at Holycross, Bruff, County Limerick. We walked the huge circle counter clock-wise, in meditation, touching every stone as we passed it. Each one of us was reminded of the bands of others who handled these stones millennia ago. Then we did the final clockwise walk and meditated in the open centre of the circle.

The feeling was one of reverse polarity and a certain clarity of the mind. Then, as we walked the June passageway I had a strange feeling of power from another source…

The 10 Trees crew help a farmer save her escaped calf from running in traffic. Irish country roads are exciting!

If you think the day was over, you are wrong. Owner and farmer Timothy Casey invited me to join him in milking the cows. The smell was glorious and I was driven back to my youth and the delight of the soft skin on the neck of the milking cow. And her warmth. I was so impressed by Timothy and his devotion to the land and I asked him for his autograph. I have it now. Glory. Happy days.

Jeff and Norm film with Diana at Ross Castle, home of her ancestors. Times have changed and the castle is now a popular tourist attraction.

On Tuesday August 20, we all set off for Killarney, land of lakes and ancient trees. The lower lake holds a giant castle, built around 1,500 years ago. It was visited by Saint Patrick and the high king, the Ard-Ri Brian Boru was educated there for two years . Yes, by my family. We have been busy with the books for a long time. This happens to be my ancestral home. It was strange being filmed with all of the crowds of tourists watching. I never thought that anybody would be interested in the home of the O’Donoghue – Beara. Oh! How times have changed.

Now I must tell you of the largest Ogham stone in Dingle that Dermot Buckley found for is. It was hard to locate. The stone is tied to the native woodland of Ireland and held the first written language of Europe, only second to the classical written language of India. The script is based on trees.

Forests for the sacred island of Eireann, Ireland, had a status that carried the culture into the land of learning. All of the royal children of Europe were sent to study and become wise.

Diana and the scots pine

They, too, were taught of the importance of trees, the evergreen, the scots pine, the Pinus sylvestris, being just one of the sacred species. Irish deal wood comes from this tree, together with druidic medicines, philosophy and ancient wisdom. Yes, it is a native specie. You will have to watch the film for more. Sorry.

So hang in there, this film is gathering strength and energy from Ireland. It will blow by you one day soon…

10 Trees That Can Save the World, Call of the Forest: the Forgotten Wisdom of Trees, Diana Beresford-Kroeger, Ireland, Jeff McKay, trees
Share Post: