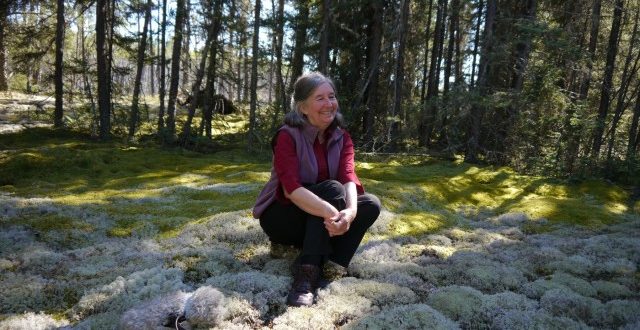 Diana greets the dawn from the dock at Bloodvein River Lodge

Today I got up early to greet the Boreal dawn. The sun was entering the tips of the trees like a timid child reaching for a lemon balloon. The sky was filled with snow-white pillows of the night. The river winked at the sky filled with fish and Norm was already there before me, sounding it all. The two of us stood in the majesty of the morning, silent with the reverent prayer of inner man.

Diana and Sophia Rabliauskas, Community Coordinator of the Pimachiowin Aki project, go for a paddle on the Bloodvein River

Sophia Rabliauskas will join me today and tell the world about the struggle Poplar River First Nation, Bloodvein, Little Grand Rapids and Pikangikum have had keeping their homeland of the Boreal pristine this past six thousand years.

Oh yes, I forgot to mention we went fishing last night and when I thought I had caught a pickerel on my line I shouted “Holy Shit!” And I thought William would fall overboard laughing…

Director Jeff McKay takes a canoe out on the Bloodvein River

Oh yes! I have to tell you another story. It was about the last day. And about our director Jeff. He announced to the boreal world in general that he found a mouse turd in his bed. It was lying between the sheets. Innocent of life until his eyes reached it, in all of its brown splendor.

Now you must remember that Jeff is a big, broad guy with somewhat of a testosterone touch. He was laid bare by a mouse turd, it could have been a shrew turd or a lesser shrew turd or even a very, very small bat turd. But it was a turd none-the-less. So I want you to know that there is life in, “dem dere Boreal hills!” And it will always start the day with a surprise.

The Bloodvein River Lodge was fabulous. I would go back any day to love and hold any scat in my bed. It was worth it. Really folks.