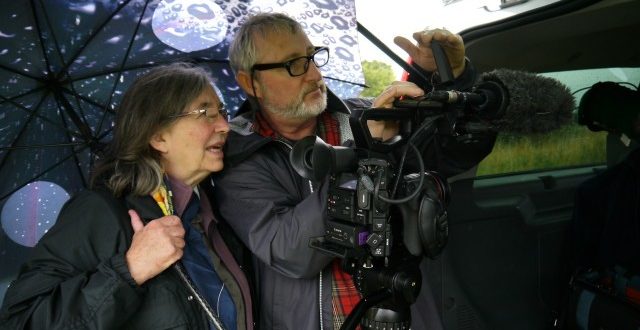 Two teams arrived in Shannon, Ireland. One team was mine and consisted of Christian, my husband and myself. We left behind, the cat Greyling in the safe hands of Katrina, Amber and David Stephenson who is an astrophysicist when he is not attending science fiction conferences. So we expect the cat to be much more intelligent when we get home.

The other team, from Winnipeg comprised of Jeff, his wife Dodie (also our production manager), and Norm. They were pressed, expressed and exposed to severe sleep deprivation by the airline industry. They arrived twenty-four hours late looking as if they had just left the gulag behind. However, the sight of a bed made them quiver with delight.

Andrew St. Ledger and Jeff McKay – rather wet and soggy after a day spent shooting in the rain.

They were joined by Dermot Buckley, who is an Irish historian and connoisseur of ancient sites when he is not behind the wheel of a Mercedes.  Also along was Andrew St. Ledger who requires knowing to be believed. He left his white charger behind in the 18th century. He is the great defender of forests for Ireland. And is a man when left with a wood chisel leaves some thing behind by way of a sculpture that blows the mind.

To learn more about Andrew St. Ledger’s organization,  The Woodland League, and the work to restore native Irish forests click here. They also have a YouTube video explaining their work here.

I will be absolutely blunt. I met a tree. And I had a conversation with it. Jeff took it all down on film. When I looked at the cut afterwards I realize with some shock that he filmed the first confluence of minds, one of a tree and the other belonging to me.

So let me describe it for you. I walked towards the Brian Boru tree, which is about a thousand years old. It may have been planted by the last High King, or Ard-Ri of Ireland. Anyway, I had much of the spirit world of the aboriginal people with me, from Hopi, West Coast North American, Aboriginal peoples of Kamloops, of Cahokia, many Druids of Ancient Ireland, of Tibet, of South America and of the Iroquois people including the Cree of the Boreal Forest, just to name a few. Then there was James Morrison, seventh son of a seventh son who asked to be remembered too.

First I walked towards the tree and I was completely aware of its presence. Then my mind moved and melted into the tree’s persona in a form of greeting that placed me into a plateau of peace. The peace was brown, a light colour of synesthesia with the music of the canopy. Knowledge was above me, feeding itself down into a translation that the tree would dance with joy only before it bowed before me and my companion spirits. I do not know how long I was there. Time itself was different, solid feeling, in a way.

The Druid legend was correct. The repair of nature is about to begin.

Many thanks to Andrew St. Ledger and his Woodland League “Magic Bus” for being our guide to the Raheen Wood and taking such good care of us 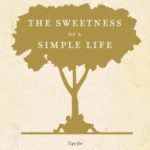