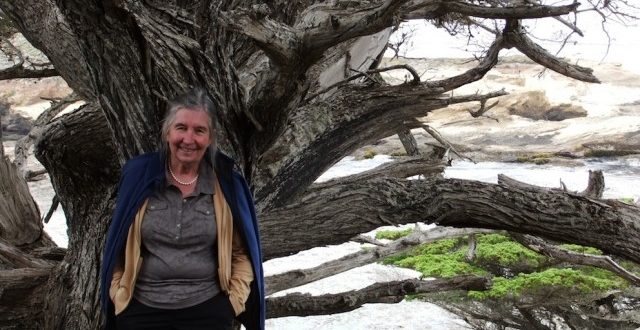 Diana’s journey has begun! Read on to catch a glimpse into her travel diary and find out what has been happening behind the scenes and during shooting for 10 Trees That Can Save the World!

The crew stands in the majesty of the forests of the grounds of Royal Roads University.  We are all learning to be a family for this film.  I will try to find the culturally altered cedar, a huge western red cedar, Thuja plicata, on the grounds from which a war canoe has been punched long ago.  That will have to wait.  Because I see the fingerprint pattern of an ancient forest mix, some trees, some ferns growing in the pattern I expect.  The peacocks are something else, peering down from the roofs of buildings with their beady eyes and bioluminescent colouring.  One has fallen for Jeff McKay our director.  He has the camera.  No.  It is the sound man, Norm Dugas, but he is silent.  Got ya!!

For more information about the remarkable Hatley Gardens  at Royal Roads University, check out their website here

Oyster Jim Martin, founder of the Wild Pacific Trail takes Diana on a tour of the trail.

On the way to Ucluelet by car, Norm driving, the scenery swallowed us whole.  Tremendous.  Stopped to shoot pollen paths on water.  Met Oyster Jim Martin, a man with a heart for nature.  He continues to build the Wild Pacific Trail on the edge of the Pacific to teach people about cougars and trees.

Measured with Norm a monster, a Queen tree, Thuja plicata, western red cedar with a circumference of 54 feet.  This fat bellied lady had more than a thousand years beneath her belt.  She was still smiling and waiting to see you all, soon on film.

Jessica Hutchinson, Executive Director of the Central West Coast Forest Society and her baby meet up with us.  Walker Jene, at one month old tied to his mom’s breast, was the youngest member of the crew.  He patiently leaned against mom while she told us of her stream cleaning to make the salmon run again.  Logs lifted, areas of depth created, shallows for spawning.  And we saw the salmon finger lings like ghosts making their way downstream.  The baby smiled and bubbled us along.  I’m sure he said something to us all.  Maybe it was a little nod that we were all on the right path in cleaning up logjams to make nature come back.  Thank you baby Walker, it’s all for you.

To learn about the Central West Cost Forest Society, visit their website, and make sure you watch their film! Beautiful images of the area and lots of information about the hard work to restore the streams.

Baby Walker, Jessica Hutchinson, Executive Director of the Central West Coast Forest Society and Diana take a break from shooting near Ucluelet, BC

We were forbidden to shoot in Cathedral Grove Forest!  Strange.  I wanted to see the rhizophores these giant trees make.  They are above ground roots that breathe in oxygen, like lungs.  Only found in ancient systems.  They are cutting right up to the edge of the river.  The grove, now, itself is under threat from the down bursts of climate change.  Who will speak for these trees?  The planet’s most ancient green inhabitants.

Friends, Bob and Lee Colwill in Victoria, threw a gala dinner for us before we left.  Me to Merrickville, Ontario, back to the peace of my garden.  The others returned to the wilds of Winnipeg, Manitoba.
July Shoot in the U.S.A.

First Cahokia in Illinois on the banks of the Mississippi River.  Then on to California.  I usually pronounce this word, ‘Caulifornia’ with the inflection of Schwartzenager.

Cahokia surpassed my imagination.  The place is extraordinary.  William or should I say Bill Iseminger played such a wonderful host to us, making sure that we obtained the film we needed from the exhibits of the Cahokia Mounds Museum Society.

Of course my eyes fill immediately on the replicas of the trepanning tools, the first accurate naturally aseptic surgical instrumentation for neurosurgery.  Imagine.

For 500 years Cahokia was a major centre of culture making it one of the great urban based cities of the world, peaking to 20,000 souls.  The biggest and best mound covers 14 acres and is 100 feet high.  It is the largest prehistoric earthen structure in the western hemisphere.  They relied on nuts, black walnuts, .  A pound of walnut meat equals a pound of steak.  Research continues.

This city of the sun, had an elite ruling class, donned by feathered capes and copper headdresses from the Great Lakes.  They enjoyed art, communal games akin to hockey and built for themselves a remarkable five cycle wood henge reading the skies with absolute accuracy.  The sun and its solar pattern were understood and exhibited to the public from the vantage point of lateral equidistance on the main mound called Monk’s Mound. French Trappist monks did a little gardening and praying on this pagan platform in the early 1800’s, hence the name.

I picked up a lunch bug from lazy lettuce, iceberg, you know the kind because it gives you that sinking feeling.  My duck and dive lasted until we got to Caulifornia.  The others were okay.  They scoffed refried beans, copper kettles and milkmaids.  All to no visible effect. My favourite, immortal trees, according to Chief Sequoia and John Muir awaited me.  They are the California redwoods, the biggest and the best that North America has on offer.  I had a conversation with one. I expect I am a tree hugger in secret, does anybody know this?  I wonder.

Diana and director Jeff McKay (Inside tree) are both self-confessed tree-huggers.

Met with Bill Werner, Landscape architect, par excellence.  He has recreated the Maritime Pacific Prairie land, bringing it back from the edge of extinction.  Personally I could have spent a lot more time looking at and examining his propagation of native American shore plants.  He and I shared our brain power in a giant research team a few years ago.

Then Bill Libby, professor emeritus of Berkeley and genetics genius.  We all met up at Fairview Manor and did not stop laughing until we left.  We went to Big Basin State Park and viewed the redwoods, Sequoia semperirens.  We talked of the need for public forests and all kinds of things ranging from how these trees conserve water, protect the ocean and fish life including the row of sea otters I noticed lounging on the kelp beds.  We did not expect to see whales.  We did.  The bird population was deafening.  We all ate good fishy dinners and California wine.  We plotted a little for future meetings.  Laughed some more.  And left for home.  Me for Merrickville, the others off to the ethers of the atmosphere.