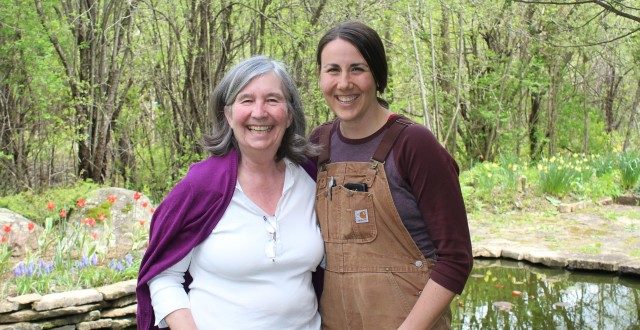 I will get to my mystical moments in a minute, because they happened a little later in the week.

This past seven days has been hectic. Last Monday night I spoke in Kemptville, ON at The Branch Restaurant for the Sustainability Fair. The restaurant was packed right to the back, the stone walls seemed to bulge out with people.

I spoke about the fix for climate change and the importance of forests in all of this. The discussion afterwards left me tingling with hope that there were some very able bodied people living near me who were listening.

Then on Wednesday morning, May 14th, I was featured on a radio program that aired on North Country Public Radio, National Public Radio, US.  Sarah Harris, an NCPR news reporter and producer, visited me a week ago to talk about my new book and film. Sarah is also very interested in the medicines of plants. So we had a medicinal walk through the garden for about an hour and a half. I also gave her a signed (in Irish) copy of ‘The Sweetness of a Simple Life’, for Professor Eileen O Donoghue, mastermind and astrophysicist at Paul Smith College, New York.

Now we come to something very strange. I would like to say that it was a kind of mystical moment. I was asked by Claire Walla, Producer at HuffPost Live, to do a video link with ‘The Huffington Post’, a newspaper that used to be owned by Arianna Huffington. And she never did invite me to dinner, despite her having said she would several years ago! Anyway, I was asked to answer some questions of a bright little blonde school girl called Maddie who has a passion for botany.

We had a wonderful conversation and I tried to answer her three questions one of which was, “what is a seed?”  Very, very good question. Then for the last question about what makes trees tick, she held up a drawing of a tree. It was a Redwood, or sequoia sempervirens.  I was shaken and just stared at her drawing because I had done an almost identical drawing of a Redwood the week before. I put it into a publicity book I had for the film ‘Ten Trees to save The World’.  My water colour was intended as an insert to keep me focused on trees.

When I saw Maddie’s painting I realized that the Firekeeper’s prophecy of the First Nations of North America was coming true. This legend is as ancient as the land. It says that the awakening will begin with the youth. They will teach their parents the wisdom they know, then the dreaming will begin. We will be joined with a common dream to save the world. We will stretch out our hands. We will hold hands across the planet. And we will, together, stop this new threat to our common home. My hand is out to you…today.

Photo of Diana with Katrina Siks by Terence Moore

10 Trees That Can Save the World, Call of the Forest: the Forgotten Wisdom of Trees, Diana Beresford-Kroeger, Hidden Harvest Ottawa, Huffington Post, HuffPost Live Tell Me Why, North Country Public Radio, Sustainable North Grenville, The Sweetness of a Simple Life, trees
Share Post: 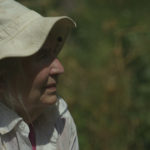