From Diana - Preview Screening in Ottawa 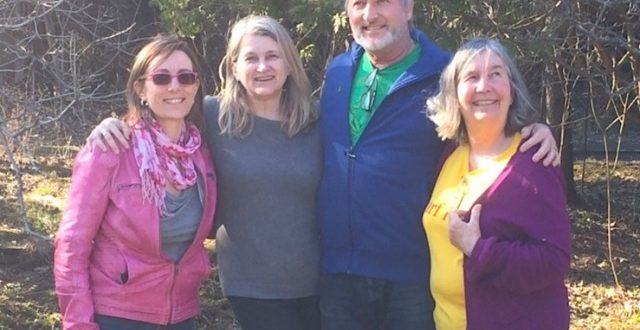 My film, yes, my film based in my book, “The Global Forest” was screened in Ottawa on Thursday 14th April, only a few days ago now. I am still in shock, like a new mom I am trying to hold my child and fondle it in my mind before it goes out as a newborn into the raw public.

Ottawa is the capital of Canada. Not Toronto. The capitol is filled with civil and uncivil servants who have worked their entire lives in the gloomy subservience of  a monopod parliament whose three eyes never shut in slumber. These human forms emerge into the light of retirement with their university degrees still in fossilized form. They were awakened on Thursday and it was a wonder to behold. The capitol lives…much to my delight. These range rovers of retirement still hope to make a difference in the society they so carefully guarded with their lives…they came to see the goods.

One, is a tiny woman with a beautiful face, small voice and focused on getting things done. Her name is Madeleine Aubrey. She is chair the Canadian Association for the Club of Rome, a world think-tank concerned with the economy, the environment, population, social justice. This organization was started by Aurelio Peccei in 1968.  Madeleine organized and hosted the preview screening in the Mayfair Theatre on Bank Street in Ottawa.

The crowd gathers outside the Mayfair Theatre in Ottawa. Photo by David W. Hutton

My husband, Christian, and I had to pick up our director, Jeff McKay, in the early afternoon from the airport. He arrived in good form with camera and cases by the bounty of Air Canada from the Winnipeg, Manitoba. Our executive director Merit Jensen Carr and Interactive Producer, Alexa Rosentreter, landed the day before and were busy with meetings at the monopod parliament.

Jeff, Christian and I had arranged to meet up with Cortez, a son of the sun, who was organizing book sales for Perfect Books an independent store owned by Jim Sherman. We went and we almost married, we had so much fun.

The line had begun. A little line outside the main doors of the Mayfair. “There will be at least ten people at the preview screening. We will put them in the middle of the theatre, so it will not look so bad”, I thought to myself as we helped to bring in books and set up a table with Cortez in a tiny area for the book signing later on. I had been given ten minutes to do this task before we were to empty out the theatre after the film screening.

First you have to understand a few things about me. I am a tree hugger. I love trees, everything about them from the cucumber tree of Canada to the sacred trees of the First Nations of North America. I love ‘em. I want to save them for your children and grandchildren. And I want to protect them as the unique clothing of a green planet without which the atmosphere would not be the common ground for breathing oxygen, our kiss of life. I want to stop climate change. And my wheelbarrow has a hole in it…

So the line got longer. Then it got longer again. The line of people crowded the pavement like a fat sausage. And it grew. The living line twisted itself around the first block and kept on growing. I do not know where exactly it ended, maybe arching over the Rideau Canal as a living bridge, perhaps. If ants can do it, maybe people can too! The mobile coil of people is still in the landscape of my mind. Then some people, passers-by, began to take pictures.

I am still in shock. How can I ever thank people for turning up? How can I ever say that you have given me so much hope that we can all hold hands together to fix the damage to planet Earth. Only numbers count, on this continent, in Europe and in Asia. This was the response in California and also in the eastern USA. We will work as a family unit, the human family to fix the planet for all life.