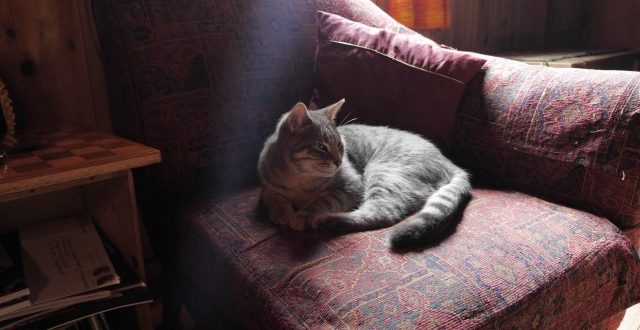 Christmas day three years ago the wind was licking the edges of minus forty degrees. The house was encased in the jaws of icicles and snow entombed the garden. The circular walnut alley was a dumb witness to the five figures who wanted to walk off the excesses of a Christmas dinner cooked on a hundred year old Findlay Oval wood stove. The place was Canada.

Returning up the driveway to the cosy comfort of home, our shoulders were hunched up from the cold. We all heard a miew. We stopped. We listened. It was impossible. We heard it again, this time in stereo. There appeared to be two leaves following us. The leaves had legs, four each, so they must be cats. No, kittens.

On Christmas day by the heat of the wood stove the kittens were christened. No small job for two starving creatures. The bigger packet of bones I called Moses and the molecule with the horizontal pinstriped tail I called Greyling. Both were proclaimed to be of the legal profession because of their tracking abilities. Indeed, they became barristers-at-law because they were as think as sheets of legal paper.

It seems that no one had much interest in the life and death of these barristers, roaming out in the cold and snowy winter. So…we had legal counsel, once again, presiding over the wood stove in judgement of their world.

Unfortunately, Moses was not endowed with the fine intelligence as is usually found in law. He was a careless cat and liked to flaunt himself out in the open. An owl picked him off one steely grey afternoon. It was quick.

Greyling – the bane of Diana’s life.

The other cat, the bane of my life, who was called Greyling, barrister-at-law, received a nickname in my household. He became the electric cat. He received the lion’s share of brain tissue. As he grew, his pinstripe tail became powerful and marked him out as a future chief justice, for sure.

The electric cat loved heights, be it tree or on the top of the fridge. He learned to do a signal system with a metal screen to let me know that he wanted to come in from outside.  His study of ornithology did not include killing, just looking and taking mental notes. He was bitten by a goldfish at the edge of the watergarden when he was doing an exploratory dip. He then kept his distance.

Greyling was often at odds with the aquatic life around the garden.

His finest hour of havoc happened while I was in bed one night. I was busily murdering a few people with the help of Rebus and Ian Rankin when I noticed the curtain move. The electric cat had managed to crawl halfway up my wonderful handmade curtains in between the lining and the fabric itself. There he swung like a pendulum clock from one side to another as if he were in space travel. The murder transferred itself from Rebus to the Kat.

Last week Chris and I came home to find the electric cat lying on his side. He didn’t move, just lifted his head to say hello. It was late. I phoned the vet. I warmed a towel and I wrapped up the cat. Chris drove. On the operating table I assisted in removal through puncture, the urine that was in his blocked bladder. We gave him oxygen filtered to his nose. But I know cyanosis when I see it. His heart had stopped.

I am bereft. Chris is bereft. The house is empty. I keep looking for him everywhere.

Goodbye Greyling barrister-at-law. I loved you so much and loved your electric character. You will go into the Legal Halls of Fame because you are immortalized in “Call of the Forest: The Forgotten Wisdom of Trees”.

May we all be so lucky, and so loved.

Call of the Forest: the Forgotten Wisdom of Trees, Diana Beresford-Kroeger, Global Forest, The Sweetness of a Simple Life, trees
Share Post: