From Diana - The Bible Blog 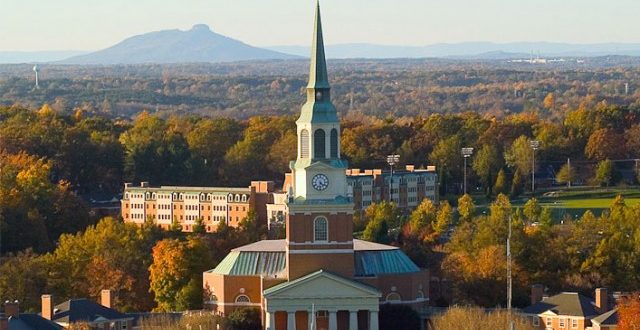 I have been traveling with Pablo Neruda again. This time down into the Bible belt of North Carolina. The School of Divinity of a private university called Wake Forest University asked me to speak on nature. Then the film, “Call of the Forest: The Forgotten Wisdom of Trees” got added.

The person who invited me was Professor Fred Bahnson, who is the director of the Food, Faith and Religious leadership initiative, including the Practice of Ecological well-being. Fred is young, plays violin and has fairly recently published a book called “Soil and Sacrament”. He met me at the airport and recognized me immediately.

Religion is on a hair trigger in North Carolina. Everybody deposits their burden of faith to their companions and the list is long. Baptist, Anabaptist, Methodist with the faint uneasy whistle of Episcopalian, definitely not the front-runner. Despite this biblical burden I met a holy man in Winston-Salem. I mean a true holy man. And he was a man of colour, in a blue, guard uniform. He prayed for me in a corner of a museum, and unusual place for real divinity.

I took ownership of Fred’s students for one hour. I lead a massive crowd through the arboretum, and I was delighted to find on American tree there called the Bald cypress. This orphan is a deciduous tree of the Southern tidewater swamps of the Gulf and the Mississippi river valley. It is a sister to the redwoods. So I demonstrated the process of forest bathing under this canopy and spoke of the benefits of the aerosol taxodione produced. This airborne biochemical medicine has strong tumour inhibiting properties. This flow is best from July to September for people who require its benefit.

Later on in the evening the film was shown. Fred introduced it and I floored the many questions from the stage from the delighted audience. They gave the film a long thunderous series of clapping. I was pleased that it was received so well. Both academics and the public had equal share of the audience…all of them seemed surprised at the quality, art and music of the Canadian film on the nature of the global forest.

On my way home with United Airlines I passed through Newark airport in New York. Our flight was cancelled five minutes before we were due to board. A freak snowstorm arrived in Ottawa with an unexpected measure, where Chris was waiting to bring me home. The long and the short of it was that I slept on the concrete floor of the airport over night.

A traveling companion called Ruth, was cold. So she wore the contents of my suitcase. We were given a survival bag for the night which consisted of a shoe polish, deodorant and detergent. Added to this, the three ladies who manned customer services informed us that we were stupid. The rage kept us warm for the night, which was slowly followed by humour.

I finally got home, exhausted to enjoy my third spring of 2016. The birds outside my window are feeding on fat and seeds. There is an ocean of them on the ground kicking and picking. Mrs. Turkey drops in for an occasional fueling. The snow is going. And by the way, I did offer to polish the shoes of the pilot and co-pilot of our plane. This polish must be useful for something…