January - Diana on The National and More... 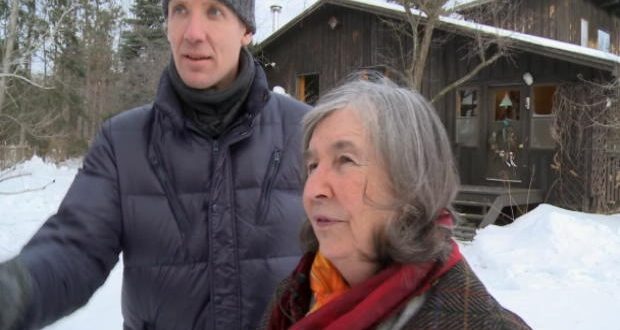 Christmas has come and gone. Dinner itself was like the United Nations, represented by all the major food groups of the world. My plum pudding, made in a hurry, turned out to be a fantastic mouthful of memory for me. Some of the others turned up their noses, imagine that. They preferred apple pie. You just can’t teach some people about the delights of Ireland…

And I missed Irish Christmas which is January 6th. That’s my own celebration and the youngest in the house lights the candle at the window to tell all who pass by that they are welcome. Smoked ham is the centerpiece for that meal with caraway seed cake.

That week I was requested by CBC’s The National, to stand in the arboretum at -15° Celsius and talk about trees. I’m still thawing out. Jeff McKay, my consultant director, liked it when it was aired. So it’s got to be ok.

The only traveling that has happened has been done by the cat, Greyling-barrister-at law. He decided in a fit of pique to travel up the inside of the lining of the bedroom curtains until he was halfway towards the top of the window. He swung sideways like a cartoon cat, and then fell down. I was not impressed by his acrobatics and strongly suggested with me ‘toe’ that he take a trip to the trees and do some ornithology for himself. He sniffed loudly, putting up his pinstriped tail and headed for the bird feeder within which he sat for the afternoon.

This past week, strange things have happened. I have been asked to contribute to a book called “The Global Chorus.” It appears that I will join forces with my old friend E.O. Wilson once again. I was also told that Nelson Mandela had written a piece for this before his recent death. I am a fan of this great man and I feel so very honoured to have my name associated with his in any book, anywhere, anytime.

In the next few weeks, apart from my writing, I will try to germinate some very precious tree seeds. They are from a strain of Ptelea trifoliata of Texas, the sacred tree of the Eastern seaboard of North America. There is one Texan tree left; it has a high density of spongy mesophyll tissue which makes it an important medicinal tree. I collected the seeds and have dried them back. I am hoping that the embryos are alive and fully formed. I will now germinate them in accordance with their own circadian rhythm. The mother tree is under armed guard. My fingers are crossed.

Ptelea trifoliata, or Hoptree, in summer

The winter has been a tough one for the garden and arboretum with brutally cold weather of long duration for weeks on end. Later we have had freezing rain followed by heavy, water-laden snow which seems to be a specialty of this new climate of ours. The fields are sheeted over with thick ice which is hard on deer, large overwintering birds and small mammals. Food is hard to come by for these creatures, so the feeders are never left empty. The winter bird count is low as is the diversity

I have a very extensive lecture agenda for this winter. I am still unsure which ones I will do, if any. This is my writing time; long nights to think and short days to write. The perfect recipe for success.

10 Trees That Can Save the World, Call of the Forest: the Forgotten Wisdom of Trees, CBC The National, Diana Beresford-Kroeger, Global Forest, Jeff McKay, The Sweetness of a Simple Life
Share Post: