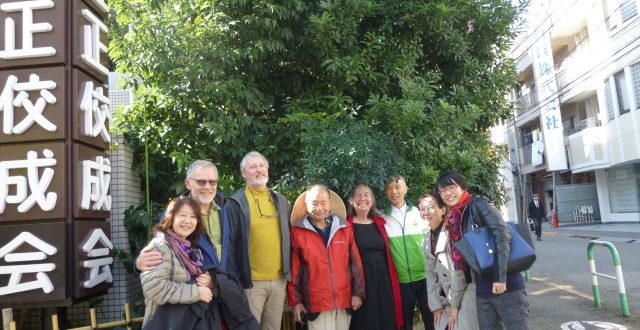 We are visiting and filming at Kifune Shrine. The double sugi tree together with it’s sacred ropes and number four spoke to me. I was shaken. You will have to see the film for the message.

Diana pauses to reflect with a Sugi tree at the Kifune Shrine. Photo by Miyuki Tokoi.

The next day I interviewed the priest of the Yuki Shrine below Mount Kurama where the forest bathing started in Japan long ago.

I suppose the next big event happened the evening of Saturday, November 9th when we met the famous Japanese composer Ryuchi Sakamoto. His music is contemporary electronic music amongst  other jazz and new wave forms but I must admit I do not dabble in myself. His stunningly gorgeous partner, with doe-brown eyes, Norika Sora, was by his side. Sakamoto has not composed anything for the past four years. He has devoted himself to “More Trees”! A campaign of planting trees.  Before his presentation backed by Barneys New York, we were introduced to him.  We were led by his men down a labyrinth of corridors to  very small room, somewhat like a throne room, and exposed to the brilliance of his reputation like a boxed gem. The hand-picked audience listened to him sitting on a cloud embedded by financial security. And buttermilk skin.

On the other hand, the grand cru of flora, Professor Akira Miyawaki, himself got dirty. He held his tree planting event at Shonan Village, which was a miracle of itself. Crowds came, were talked to. Within one hour 2,400 top quality potted trees were planted. Twenty-two species in all from the native laurel to the oak. These deciduous trees are deep rooted and anchor the soil against tsunamis, earthquakes and most of what climate change can throw at us.

I am so honoured to be part of the planting team that planted laurels into Japanese ground. I feel as if I have done something worthwhile for the Japanese people to help them in the future. So many strangers thanked me with the music of their language that day, including Akira. I feel I have a friend in him and a treasured memory.

Thursday November 12 and Wednesday November 13 were half shoot days. We went to a fish retail store owned by a super-tall Mr. Ookawado. There were fish everywhere. And eyeballs of fish, that I was assured by Masayo Okayasu, Tomomi’s assistant, were healthy.  Some things are very strange to me, especially on my plate. And open eyeballs are one of those things. Forgive me, Japan!  Jeff was B-rolling and Norm was sounding.

I prayed at Meij-Jingu Shrine in central Tokyo before we started filming. It is a sacred shrine surrounded by woodland and a large bird population who seem to laugh at the people below. This is another world of silence in a city dense with noise. I spoke about the nuclear reactor at Fukishima and the isotopic leak into the air and sea. I stated that, the rest of the world is afraid, because our turn will come, too. Many of the world’s reactors sit on the edges of tectonic plates. These can move, anytime.

Norm was a huge success with the children at Ikebukuro Elementary School. They saw his headgear and wanted to know what he was listening to. He was so patient with the children. One by one they came up and skipped away, delighted at the novelty of three – way sound. He was an excellent ambassador for the film. We went on to a church where Akira had planted some trees in an impossibly small place. These were shooting to the sky.

Tonight, November 14, we will meet. Jeff Norm, Tomomi and Masayo will dine at a noodle restaurant.  I will be treated to one noodle while I speak of learning, wisdom,  forests and the responsibility we must share for helping the planet. We can make a difference. Especially if we look to the work of Katsuhiko Matsunaga and Akira Miyawaki. I figured out that between the three of us, we have a total of about 140 years of study of the forest.  That should be enough to get 8 billion people started…

We will hold hands across the planet; Katsihiko, Akira and I. Please join us. We need you. You need you. We can do it together. I will speak to Akira again on Saturday November 16. I look forward to it.

Then, we leave for Canada on the following day, Sunday 17th November. We leave this beautiful and civilized country behind with our many new friendships. We will be sorry to go…

Director Jeff McKay and the mountains of Japan. Photo by Miyuki Tokoi.

10 Trees That Can Save the World, Call of the Forest: the Forgotten Wisdom of Trees, Diana Beresford-Kroeger, Jeff McKay, Professor Akira Miyawaki, The Sweetness of a Simple Life, trees
Share Post: