Rolling Along in Ireland 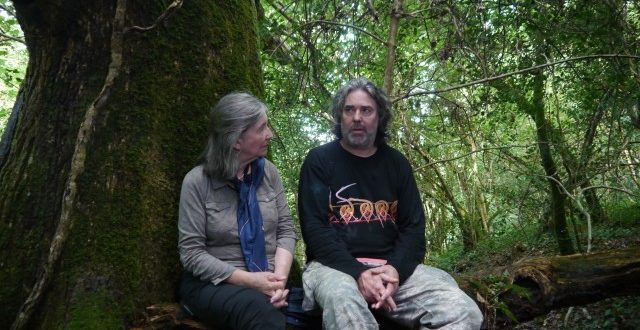 The night before last our travel shape changed. It is Ireland, after all. Chris, Norm and I pointed our bellybuttons toward food. Delicious food. We walked to our destination, Pipers Inn. The Germans got there before us and were attending to their plates and pricey wine. Woebegone, we headed back into the night filled with brambles, roadways and careening cars with a mind of their own. Irish.

By divine revelation, a white van passed us. The front was filled with a jam sandwich of Jeff, Dodie and Andrew St. Ledger, who is a big man even if he did not have his white charger with him in the front seat that particular night. So as custom would have it, we were loaded on, Chris, Norm and I climbed in the back of this paddy wagon. We kept a low profile because the Guarda Siochana (police actually, the guardians of the peace) were on the prowl.

We rearranged our beauty to fit between wooden mallets, pieces of unworked timbers, gasoline cans, some truly frightening items of clothing, more wooden mallets an a kindergarten of tools risking rust and death by work. Andrew drove into the night. We helped ourselves to the sleeping bag and the safety of the floor, until we arrived in Killaloe at a pub. Our six bellybuttons waited. Ruby Ale waited. I will not tell you anymore, because it is not your business.

Yesterday Andrew pulled a pair of wellies out of the miasma of the back of his van. He was staring at them. I had carefully placed two empty plastic water bottles into them during my midnight journey.  No man should become complacent about his foot gear…. But, he was staring intently. Then he asked me, “So you think rats made these bites?”

We were sharing the paddy wagon with God’s little creatures, that night. And I can tell you right now that they were definitely not kittens.

10 Trees That Can Save the World, Andrew St. Ledger, Call of the Forest: the Forgotten Wisdom of Trees, Diana Beresford-Kroeger, The Woodland League
Share Post: