The Release of "Sweetness" at Last! 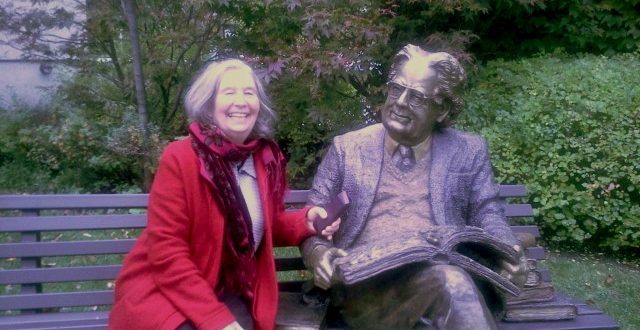 Diana could not resist this statue of famous literary theorist Northrop Frye, found on the University of Toronto campus! (photo by Paul Farrelly)

Diana’s new book, “The Sweetness of a Simple Life”, was released on October 22, 2013. A whirlwind of promotional appearances ensue…

Those of faint heart, stop reading right here.  I went up to Toronto, by train, first class on Friday last.  I stayed the night in the home of my publisher at Random House, Ann Collins.  I rifled through the art of her husband, Eric.  We spent a glorious hour in his studios looking and speaking about art.  His landscapes hold the heart still with delight.  I will be delving into my purse.  My eye is set on one of them.  And I think that Charlie Hill of the National Gallery of Canada should wake up and smell the Rose scent of the feral artist outside of the pale of the classical Canadian!!

Next day had a fab lunch with three other writers, Jo Baker (Longbourn),David Finkel  (Thank You for Your Service) and Arno Kopecky  (Oil Man and the Sea).  All authors gave a good showing and talk.  I sold out.  And I explained that the famous Ben McNally family were saddlers in Ireland.  The horse and hunting is no small item for the Irish.  And, yes, you will see horse on the grocery list of the country folk in County Waterford, with, horse manure around the roses!

Diana and Arno Kopecky, author of Oil Man and the Sea, all smiles at lunch (photo by Amanda Lewis)

Next day, Evan Klein, publicist, led me by the halter into the radio studios of Terry Mercury for the Ward and Al show.  I was paced around the show ring and exhibited my sense of humour from under my mare’s mane.  We had a lot of fun on air.  I was asked to come back.

Then, Sunday was the day of the war.  Let me set the scene.  I was staying at the King Edward (Eddy) Hotel.  I had invited Dr. Ursula Franklin to High Tea.  Amanda Lewis, editor and high queen, Ban-Rí, came too.  This beauty is in possession of a keen wit.  All three of us were in close contact with our tea and conversation about technology versus humanity when we were interrupted by … let me say… a very wealthy young man whose name is well known to the balance sheets of the banks of Canada.

He wanted to be introduced to Ursula.  She obliged with a twinkle in her eye.  Then his sights were set on ‘The Sweetness of a Simple Life’.  “I want the book,” he stated.  Amanda answered, “you can’t have it.  The book is on sale in the bookstores tomorrow!”  He countered, “I will give you $500.”  “No,” Amanda’s voice was cold.  “I want it,”he pouted.  “You can’t have it,” she repeated.  We, by now, had quite an audience.

“When will you next be in Toronto.  I want your signature,” he pointed his body in my direction.  “Sorry, after this I will be in Japan and then in New York.”  “I will fly my plane to New York.  I will bring you out to dinner and you will sign the book.”  His eyes now ignored Amanda, saying goodbye to Professor Franklin, he breathed, “You are one of my heroes.”

“Brat! Spoiled brat,” Ban Rí shot after him, “Did you see how he wasted food.  There was so much good food left on his plate.”  She was breathing an icy fire.  She looked magnificent.  If the human race can produce such women who will not let the rich rule, then we are in good hands.  I as so impressed.  Ursula was too.

Yesterday was a T.V. morning, a short piece of air time.  Off to the train, home and a good night’s sleep with the sounds of owls hooting.  Calls from young people pepper my day.

I will give Nancy Wortman a signed copy of my book.  She is an unsung hero, because she deals with my manuscripts.  And I am off to Japan….

Diana has been all over the media! Check out the coverage:

In the Waterloo Record

In the Globe and Mail

10 Trees That Can Save the World, Call of the Forest: the Forgotten Wisdom of Trees, Diana Beresford-Kroeger, Global Forest, Sweetness of a Simple Life, trees
Share Post: